These 50 have led some of the most dynamic, exciting and successful businesses in the UK and abroad, all of which have changed the ways we live and work. They span the breadth of architecture, property, development, investment work and hospitality. The list was compiled through discussions between the IHM editorial team on who has changed Urban Living in the new decade. It will be released in the weeks up to URBAN LIVING FESTIVAL in instalments of ten. 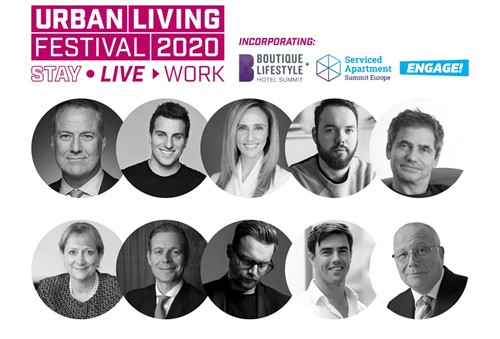 In 2008, industrial designer and strategist Brian Chesky alongside his flatmate purchased three mattresses and rented out his flat online. Later that year, he founded Air Bed and Breakfast, which would go on to upheave the entire global accommodation market.

As Airbnb CEO, Chesky has overseen the company’s rapid international expansion and diversification, expanding into a fully global corporation. He has also been a steady hand during the global pandemic, acting decisively and quickly in order to help support his business’ community as the coronavirus closed many businesses. As his company signs the paperwork for their IPO, Chesky’s work has made it one of the business world’s most anticipated events. Stephen Conway’s career started in banking but shifted to property in the 1980s to start his own firm. That venture was purchased by Frogmore, for whom Conway would work for until starting his second venture, Galliard Homes, in 1992.

The company since grew into the largest privately-owned residential property developer in London. The group manages a £3.6 billion portfolio of over 6,000 homes, 950 hotel rooms and one million square feet worth of commercial and retail premises. Its newest project is a £600 million mixed-use scheme with Aviva Investors around the fringes of South Bermondsey. When Airbnb blew open the door of alternative accommodation, many attempted to follow in its footsteps. Few have been as successful as Francis Davidson’s Sonder. After renting out his college apartment in 2012, he met with collaborator Lucas Pellan to hybridize the hotel with the home-share.

Sonder has since received hundreds of millions in investment, been valued at over $1 billion and has operations around the world. Furthermore, his company has begun building its own real estate of its own in the midst of expanding. He has been named on Forbes 30 under 30 in the consumer technology section, and sonder was named “most Innovative travel company of 2019” by Fast Company. After having been homeless four times and leaving school without qualifications, Joseph Daniels has set out to solve the UK housing crisis. He founded Project Etopia at the young age of 23 to help create eco-friendly, tech-forward homes that people truly want to live in.

His business relies on the idea of Modular housing, with most of the various components made in advance, then put together on site. This allows them to come together in a fraction of the time, allowing his team to put greater emphasis on materials and add more tech-centric elements. This had let Project Etopia grow quickly, gaining multi-million-pound investments and acquiring their own factory to create their modular structures. A leader in the world of build-to-rent and student living, John Dunkerley has built his career on strong relationship building. He started taking the property arm for BPIM global and spearheaded UK investment for Jones Lang Wootton and Fletcher King. Struggling to gain investment in Apache Capital from traditional British investors, Dunkerley used his network of connections in the middle east to start funding projects.

His track record now comprises over £2.5bn of real estate transactions globally across Apache’s various markets. With initial investments in student lending, the company added build-to-rent in 2012, where Dunkerley’s skills in relationship building and working with investors has continued to this day. Leader of one of the largest American developers, Robert Faith has been a major player in US real estate. Starting his career at Trammel Crow, he left in 1990 to found Starwood Capital Group with Barry Sternlicht.

He moved on from Starwood in 1993 to create his own venture, Greystar. The company would use the three pillars of property management services, acquisitions and development to rapidly expand its portfolio, centring on multi-family homes. The company now operates over $200 million worth of real estate globally, and expanding into new markets like student housing, purchasing EdR for $4.2 billion in 2018. Now a partner at Wyoming based real-estate firm REALM, Danielle Garofolo made her name as a marketer at a variety of New York Luxury real estate firms. Her tenure as Chief Business Development Officer and Chief Strategy Officer at CORE Real Estate and Stribling & Associates demonstrated her attitude to storytelling and her desire to push for success in her industry.

Garofalo’s marketing strategy has emphasised the combination of digital tool usage and sales mentalities to help reach new audiences and boost her companies’ sales. She has also worked as a content producer for groups like Minyanville, Inman|Next, and her own social media company Noisecut. In her spare time, she engages in adventure sport and other outdoor activities. From his career as an Olympic Calibre Sailor to his experience as founder and executive, Robert Godwin does things to an extremely high level. In 2011, he rose to become the managing director of his family’s Lamington Group, operating the first set of Lamington Serviced Apartments in addition to the traditional rentals it was previously running.

From there, he founded Room2 Hometels, hoping to capture the aesthetic qualities of design-led hotels with the comfort of an apartment, inspired by his own homesickness when sailing. The group opened their first location in Hammersmith and quickly expanded to a second in Southhampton. Godwin hopes to keep his expansion going, with over 200 units and 1000 keys in the UK over the next eight years. CEO of Grainger since 2015, Helen Gordon has been involved with development across the landscape, starting her career with a single railroad in Milton Keynes. She then worked for John Laing, Ashford International, and Railtrack, where she learned how to manage adversity, before landing at RBS for 12 years.

She was named CEO of a firm that was known as a drifting venture and immediately made changes. She cut off the capital hungry half of the firm and set into the build to rent sector, hoping that it would revive the company’s waning fortunes. As a result of her leadership, Grainger’s portfolio now extends to over 9,000 homes worth over £2.9bn, with another 9,000 in the pipeline. Handelsman’s work did not stop there, renovating the Chiltern Fire Station in 2014, renovated Ealing Studios in the mid-2000s, and has invested in a wide variety of regeneration projects from Shoreditch to SoHo. His most famous project is the St Pancras Renaissance Hotel, saving a property once called “too beautiful and too romantic to survive” from dereliction. His efforts have kept many of London’s best-loved properties operating and have influenced how developers view antique buildings.