George Sell Uploaded 26 April 2021: UK: Plans to build an aparthotel as part of the redevelopment Bristol's historic Soapworks have been dropped for more affordable homes. 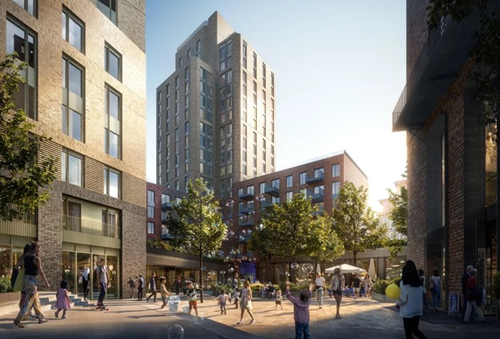 Developer First Base is proposing a £175 million transformation of the grade II listed building, on Old Market, into homes, offices and retail space.

The plans for the former Gardiner Haskins store were recommended for approval last month, but development control committee members were uneasy about the “unusual” amount of flexibility that granting permission would give.

There were concerns a decision to give consent, as advised by Bristol City Council planning officers, would leave First Base with a free choice of two alternative developments.

Under the proposals, each of the developments would include two new buildings, a restored Soapworks and a mix of workspace, homes – 20 per cent affordable – cafes, restaurants and green areas but the loss of some historic frontages.

One proposal was for 243 apartments, a food and drinks hall, retail, leisure and commercial areas and 15,503 square metres of business space. The other, 166-home option, would replace many of the flats with an aparthotel, with 15 fewer affordable homes.

First Base has said it will drop plans for the aparthotel in favour of more housing. It said there would now be 48 affordable homes included in the total of 243.

Lucinda Mitchell, project director at First Base, said: “We have withdrawn our proposals for a hotel, in response to requests by planning committee members, in favour of providing the additional housing and the extra affordable homes desired. Supporting Bristol’s inclusive and sustainable recovery, we look forward to bringing the Soapworks back to life, re-opening its doors to the public to once again enjoy this beautiful Bristol building, which will provide a new purpose-built food hall, local independent cafes and shops alongside new flexible workspaces, homes and outdoor public space.”